I have just read THIS article written by Billy Bragg, the supposed left wing activist and socialist who wrote songs such as the following:

Yet in the following article he writes about the skateboarders capagining to save the Undercroft area of the Southank center and refers to them in ways such as: "The campaign has given skateboarders, many of them young people, their first taste of activism". He appears to be looking down upon us as skateboarders and thinks that we are an uniterlectual bunch. For someone who likes to appear to be a spokesman for many underprivilged people he appears to have missed the point of the campaign completely and what us as skateboarders are actually trying to do. To save a large part of our heritage.

Someone on Twitter suggested he went into Slam and talk to the skateboarders in there. Turns out he already has or perhaps has not, as this is Slam's response:

Billy then came back trying to defend himself (perhaps a statement of guilt), with Slam even saying that they have the CCTV footage and would like to release it: 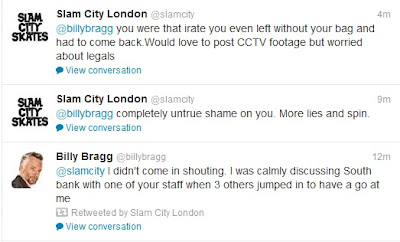 For somebody like Mr Bragg who stood on picket lines and protested as well as appearing on programs such as Question Time you would think that he would have an understanding of the matter and be able to open his mind to the views and ideas, but it appears he has not grown old with grace and can only see it from his blinkered view.

Perhaps there is a reason that LLSB did not want to speak to the Southbank center at a recent meeting (I cannot speak for those involved in the group) but it does appear very obvious why. Because the Southbank center cannot and will not accomodate any views of the undercroft and its current position other than what they believe is right.

Shame on you Billy Bragg and the Southbank center.

Hopefully this makes some sense. Rant Over.